Jason Gallant, who earned his master’s and doctorate degrees in school psychology from UF’s College of Education, has been given the college’s 2014 Outstanding Graduate Leadership Award. Among numerous achievements, he was recognized for tripling the number of families served during his first year as chief psychologist at the Boys Town Central Florida Behavioral Health Clinic in Oviedo, Fla.

Gallant received his latest honor during the COE’s 2014 Recognition Banquet, held April 11 at the UF Hilton. He says his focus on improving the lives of youth through early identification of behavioral problems was inspired by his mother, an elementary school teacher who he says had “a genuine passion and enthusiasm for giving children the gift of knowledge.”

Gallant grew up in Fort Lauderdale and earned his B.S. from Florida State University in 2004. He received his master’s in 2007 and his doctorate in 2011 from UF.

“I truly appreciate the faculty at the College of Education,” Gallant said. “The faculty, staff and my peers helped me to become the person and professional I am today.”

Gallant completed his pre- and post-doctoral fellowships in behavioral pediatrics at the Boys Town Center for Behavioral Health in Omaha, Neb. His personal interests include health and fitness, traveling and spending time with Lola, his Jack Russell terrier. 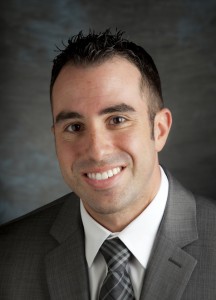