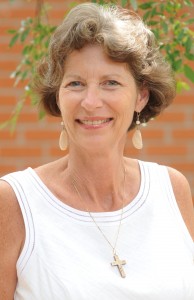 “I wanted to compliment the recent issue of the College of Education magazine.  I am a graduate of the Counselor Ed Program at UF (1996), and I really enjoy keeping up with what is going on. The College did a fine job of highlighting the fine education program at UF.  I retired as the Head of School at St. Mark’s Episcopal Day School in Jacksonville, Florida in June of this year. My masters and specialist degrees from UF were instrumental in helping me advance my career. I began as a guidance counselor, then went on to become an assistant head of school, and then a head of school. All I gained at this program at UF, helped me tremendously in my day to day work in my various positions.  Best of luck and great job on the magazine!”

After completing the UF Couselor Education program, Hardage was hired as the first guidance counselor at Grace Episcopal School in Ocala in 1996.  “I was able to completely create the program,” she says.  “I put in place everything I learned at UF, large group guidance, small groups for specific purposes, individual counseling, a peer facilitator program. I had no restrictions and I was able to set up a true guidance program , without a great deal of clerical responsibilities. In 1997, I was called to be the assistant head of school . I took on this responsibility , while continuing the guidance program I had implemented.”

In 2001, Cathy Hardage became the assistant head of school at San Jose Episcopal Day School, located in Jacksonville.  The next year, she received the Hooker Grant from the Florida Council of Independent Schools for a character education program she developed called, “Fruits of the Spirit.”  Cathy published a booklet with the grant money on how to implement the “Fruits of the Spirit” program in secular and religious schools..

In 2006, Cathy Hardage became the head of school at St. Mark’s Episcopal Day School in Jacksonville.  She remained the head of the school until her recent retirement in June.  Her character education program is also incorporated into the school’s community culture.