The Education Policy Brown Bag provides faculty and graduate students with a weekly venue for presenting and discussing education policy research in progress.  Attending by around twenty to thirty faculty and students each week in the fall and spring, the Brown Bag offers the first glimpse at the latest education policy research coming out of the Center and across UF. 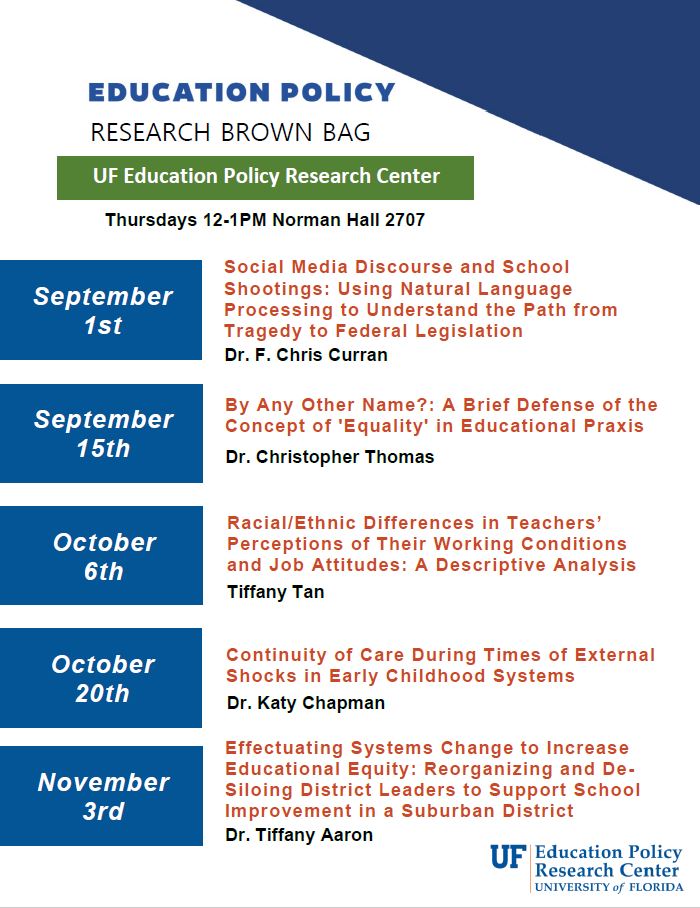 Funded by the American Education Research Association (AERA)’s Research Conference Grant Program and hosted by the University of Florida’s Education Policy Research Center, the Improving Data for School Discipline research conference brought together a select group of leading and emerging scholars in the field of school discipline research to collaboratively chart paths toward innovative data sources that further our understanding of school discipline and the effectiveness of policies and interventions at reducing exclusionary discipline and improving equity in discipline.

END_OF_DOCUMENT_TOKEN_TO_BE_REPLACED

Central city neighborhoods in the United States have long been plagued by concentrated poverty, racial segregation, and state-sanctioned disinvestment. In the last several decades, however, another important reality of residential stratification in urban America has emerged: namely, not all low-income neighborhoods stay that way. Modern trends are pointing, in part, to the reconstitution of urban space as a destination for affluent households, a repository for investment capital, and a battleground for the “right to the city” to be claimed and justified. These trends are codified in processes of gentrification that are reshaping the social, racial, economic, and institutional organization of many urban communities nationwide. However, the empirical research on how urban schooling figures into these processes is only beginning to emerge.