Although some light infrastructure work has already begun, a formal groundbreaking ceremony held on Friday (March 23) marked the official start of the heavier work on the long-awaited restoration of historic Norman Hall at the University of Florida.

The stately-but-aging building is the home of the College of Education, with a past as colorful as it is old. Vignettes from Norman Hall’s storied past were recounted at the event. UF and college officials and guest dignitaries also unveiled what the new and improved academic hall will look like upon completion and how college deans and faculty believe it will transform how they prepare teachers and other education professionals and leaders for today’s global society.

The college shared the school building with its K-12 lab school until 1958, when P.K. Yonge moved a few blocks south to its current campus. A year earlier, in anticipation of the move, the UF campus building had been renamed after James W. Norman, who served as dean of the College of Education from 1920-1941.

Friday’s event included an appearance by the UF marching band drum line, the traditional ceremonial dirt toss with golden shovels, a roster of dignitaries and a few brief speeches highlighting the colorful and impactful history of Norman Hall, and details about the top-to-bottom rehabilitation of the 84-year-old edifice. 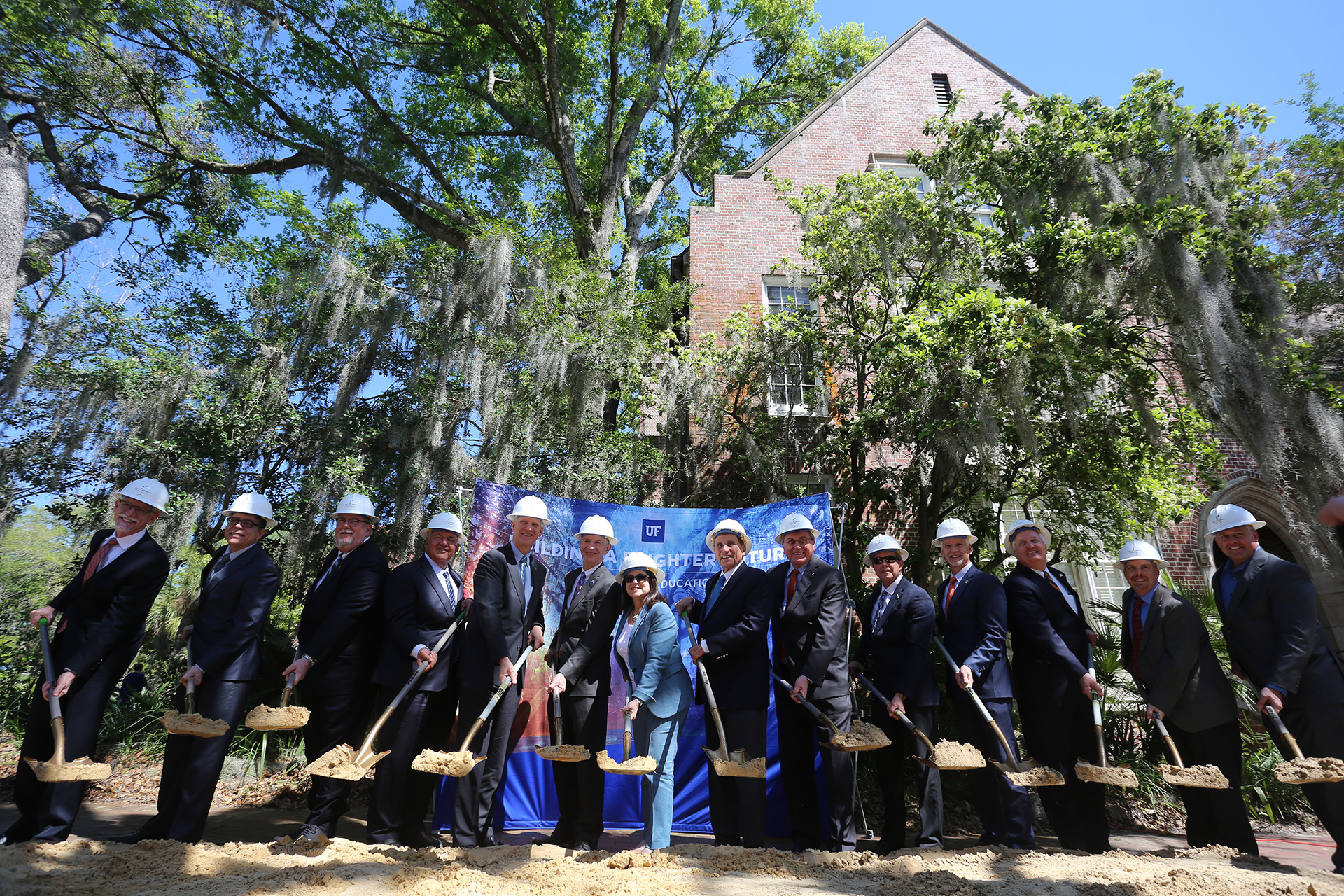 Ghost stories were not a part of the program. Norman Hall, besides holding fond memories of former students and instructors from both the college and P.K. Yonge, also has been rumored for decades to be haunted by the ghosts of several P.K. Yonge schoolchildren who supposedly died many years ago in an elevator accident. (No documentation or living eyewitnesses can be found to verify the story.)

Believers may wonder if any such ghosts will stick around during all the banging and crashing noise from the renovation work. Or, maybe, they will like their new haunts. Much of the restored building will still be easily recognizable, according to Tom Dana, associate dean of the College of Education who oversees the building rehab project from the college’s side.

We’ve gone to great pains to make sure the décor and furnishings maintain much of the building’s character from when it was built.

“Norman Hall was listed on the National Register of Historic Places in 1989, so any repairs or construction on this historic property had to be approved so any harm to iconic building features can be avoided or minimized,” Dana said. “We’ve gone to great pains to make sure the décor and furnishings maintain much of the building’s character from when it was built in 1934.”

He said the made-over Norman Hall will be a tasteful combination of “something old and a whole lot new.” Virtually all improvements will occur inside the building.

The Florida Legislature earmarked nearly $29 million in funding last spring for the long-needed improvements. Another $3 million allocation will pay for the refurbishment of the Education Library annex, built in 1979.

“This project will be the first major restoration work on Norman Hall in the building’s 84-year history,” said UF Education Dean Glenn Good.

He said the project’s first major phase is now underway. It involves emptying and vacating classrooms, labs and offices in the newer (1979) Norman Hall Annex wing and relocating to other space elsewhere in the original Norman building or on the UF campus. In May, occupants in the original Norman building will make a similar move into temporary quarters during its 18-month makeover.

The projected completion date for the work is September 2019, with plans for full occupancy and use by January 2020, according to Good.

The renovations and repairs will include an overhaul of the building’s infrastructure including a new roof, windows, plumbing, electrical system, heating, ventilation and AC, and removal of asbestos and lead paint.

The most exciting improvements, though, will be the addition of many student-centered features, such as technology upgrades, configurable classrooms and meeting spaces, more space for research, and electrical outlets to support student technology needs.

Good said the most exciting improvements, though, will be the addition of many student-centered features, such as technology upgrades, configurable classrooms and meeting spaces, more space for research, and electrical outlets to support student technology needs.

Also, a roomy conference room will be added for hosting symposia and guest speakers. The conference center will connect to a new café bakery in existing space now serving as Norman Hall’s rear loading dock.

Good said he hopes students, faculty and staff who will be studying and teaching and working at the College of Education during the building renovations will all come together with the mindset that they are part of something really exciting and historic that will impact education in Florida for generations to come.

“The renovations will make Norman Hall more suitable for preparing the educators and educational leaders who will address the educational opportunities and challenges of the future,” he said.