Passing the torch of opportunity

“They helped me get an education. Why can’t I help others?”

Investing in the potential of another can set into motion a ripple of kindness that shapes generations.

For double Gator Glenn G. Tucker, his life was transformed by the opportunity to pursue higher education at no cost because another recognized and believed in his talent. Recently, he endowed a scholarship to pay it forward and champion the same opportunity for others.

Tucker began his academic career following discharge from the Navy in 1946. With the support of the G.I. Bill, he gained his associate’s and bachelor’s degrees at Iowa State Teachers College, now the University of Northern Iowa, and went on to become an elementary science teacher.

“Even when I was a little boy, I always liked science,” Tucker said.

His teaching career led him to Sarasota, Florida, where he taught at a local elementary school and hosted science workshops for students during the summer months. His passion for the subject shone through his presentations, and he began attracting more than just elementary students to attend.

Tucker gathered crowds of more than 200 to his workshops, with students of all ages coming with their parents and grandparents to listen and participate in his lessons and activities. A University of Florida professor, having been tipped off about these summer lessons, came to observe. Dr. Caspar Rappenecker, head of the Department of Geological Sciences, offered Tucker a fellowship to attend UF and pursue his graduate degree.

“He had a big influence on my life,” Tucker said. 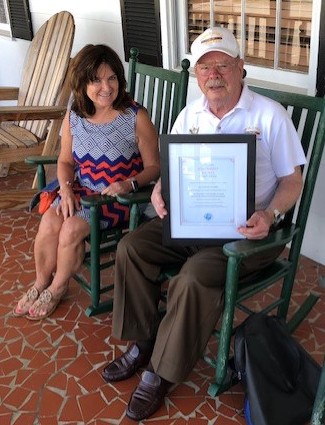 Dr. Glenn Tucker and his daughter B.J. displaying certificate of induction to the UF Endowment Society

He graduated with his master’s degree in Science Education in 1967 and was offered an assistantship — by the same professor — to also gain his specialist’s degree and doctorate at the College in 1968 and 1969, respectively.

“I have never, ever, in my life paid tuition,” he said.

Tucker shared what he valued most about the College was the camaraderie he felt between the students and faculty.

“I fell in love with the University of Florida,” he said.

But Tucker fell in love with more than just UF. On the steps of Norman Hall is where he also met Beverly, a Special Education and Early Childhood Education graduate student, who would later become his wife.

Together, they had full and prosperous careers in education. Glenn served as an associate professor of Science Education, educational science consultant for the state of Georgia, high school principal, adjunct professor of Science Education and assistant superintendent of schools before retiring in 2001. He has published several education articles, primarily discussing effective science teaching skills, and seven books throughout his career.

“Teaching, to me, is passing on what you know and you try to make it as interesting and as fun as you can so the kids will enjoy learning,” Glenn said.

A supporter of the college for decades, Glenn decided to establish a scholarship in 2018 not only to repay the college for his education, but also to embody his and Beverly’s shared love for the UF College of Education.

Glenn created the Drs. Beverly Tucker and Glenn Tucker Endowed Education Scholarship to support future Early Childhood educators, like Beverly, who champion the development of the most important of age groups — birth to age five. “That’s the basic foundation for all of education.” he said.

“I owe Florida everything,” he said. “That’s why I support them.”