The University of Florida has selected three-time graduate of the UF College of Education, Dr. Gerardo González, to receive its 2018 UF Distinguished Alumni Award. This award is the highest honor a graduate can achieve and signifies a graduate’s contributions in his or her chosen field or outstanding service to the university. The distinction is reserved only for those who have achieved true excellence.

Gerardo González exemplifies what it means to be a distinguished alumnus. From humble beginnings, González was born in Cuba and immigrated to Miami at the age of 11, he excelled to become Dean Emeritus and Professor of Educational Leadership and Policy Studies at the Indiana University School of Education, demonstrating hard work/commitment as a leader and advocate of education.

Looking back to the beginning of what would become an illustrious career, it does not seem that González would end up at the forefront of education. Although the mentality of hard work was instilled in him by his father from a young age, in the formal education establishment he initially identified as a “slacker” and took vocational courses while working in retail. When this became no longer viable and the economy slumped, one of González’s friends mentioned the idea of going to college. From here, the rest is history. 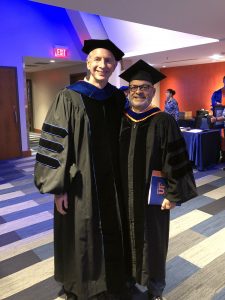 González’s dedication to helping others characterized his career as a student, starting with BACCHUS (Boost Alcohol Consciousness Concerning the Health of University Students), an organization he founded as an undergraduate to improve alcohol abuse/prevention awareness among students.

From this jumping-off point, González moved into higher-level roles in academia, starting as a faculty member in counselor education, moving up the ranks to increasing responsibility and administration.

A tireless advocate for quality education and health promotion, Dr. González has been a spokesperson and proponent of creating a seamless system of education from pre-kindergarten through college to serve the needs of all students. He has actively promoted state and national policies to achieve this goal and prepare educators who can effectively work with diverse populations to impact leadership development and student learning throughout the world.

Read more about Dr. González and his journey
2018 Outstanding Young Alumni – Impacting Others Through Service in E...