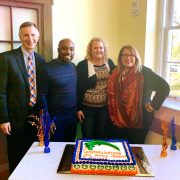 How does stress affect middle schoolers with emotional and behavioral problems?