Lauren Marlowe had to climb over nearly two dozen fellow Gators to win the Alachua County School District’s teacher of the year award.
Marlowe, a language arts and reading teacher at Oak View Middle School, received the district’s top teaching honor on Feb. 2, besting a field of 39 teacher honorees, one from each district school, including 22 graduates of the University of Florida. Nineteen of the teachers in the running for the award are alums of the UF College of Education, including Marlowe.

Learn more about Marlowe and other finalists: 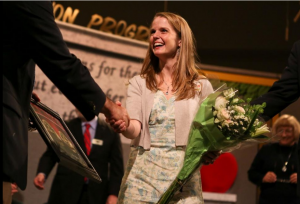 Lauren Marlowe, a graduate of the College of Education at the University of Florida, receives the Alachua County School District’s Teacher of the Year award. (Photo courtesy Gainesville Sun, Emma Green)

“It’s such a surprise, but it’s also an affirmation,” Marlowe said after the recognition ceremony. “It tells me that I’m doing the right thing, that I’m headed in the right direction with my career and with what I’m doing for students.”
District officials said Marlowe’s ability to connect with her students is one of the reasons she was named the teacher of the year. She will now go on to represent Alachua County in the Florida Teacher of the Year program.
The district has a multi-step process to decide the winner of the annual award, spokeswoman Jackie Johnson said.

Here is the teachers-of-the-year-alachua-2016-17 at each of Alachua County’s 39 public school districts, including graduation information of the 22 Gators.

Teachers at each of the district’s elementary, middle and high schools nominate and vote for the teacher they want to represent them in the recognition program. These winners submit a resume and a statement of their philosophy of teaching and then previous teachers of the year select from the nominees an elementary, middle and high school finalist. These finalists are videotaped interacting with students in their classrooms and all 39 of the teachers vote to select the districtwide teacher of the year, Johnson said.
One of Marlowe’s students, eighth-grader Jillian Provost, introduced Marlowe at the ceremony. Provost, who wants to be a teacher some day, said that Marlowe is a “huge” role model. “She’s a great example of an exceptional teacher. She challenges you, makes learning enjoyable and connects with her students.”
Marlowe has been teaching language arts and reading at Oak View since 2013, serves as sponsor for both student government and the art club, and in 2014 established the school’s peer tutoring program to encourage high-achieving students to establish relationships and provide support to struggling students.
She thanked her husband, fellow teacher Jordan Marlowe, and her children for their support, and she cited her own teachers and her colleagues for her success. Finally, she praised her students. “They have no idea how much I gain from them,” she said. “They give me the opportunity not just to try to make the world a better place, but the potential to cultivate myself into a better person.”