Elizabeth “Buffy” Bondy says mentoring doctoral students is at the heart of everything she does.

A College of Education faculty member since 1989, Bondy has so many doctoral students that she has to turn some away. She even mentors other mentors. Happily, this is work she loves to do.
“I am a little overwhelmed. I have to learn to say no,” Bondy says. “But our doc students are wonderful. They are incredibly dedicated and passionate and deeply intellectual. It’s a blast to work with people like that.”
No wonder Bondy has won the highest honor UF bestows on faculty mentors. She recently was one of six professors across campus to receive the 2016-17 Faculty Doctoral Mentoring Award, an annual honor that recognizes professors for excellence, innovation and effectiveness in mentoring doctoral students through dissertations. 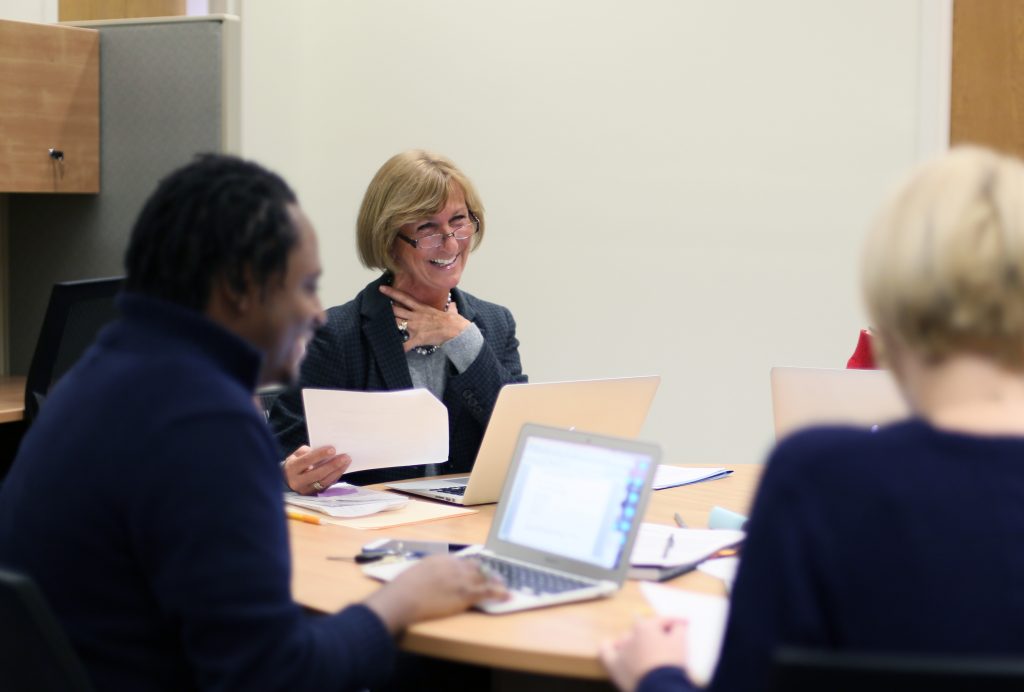 Focus on improving education in high-poverty areas
Bondy’s primary area of research is unlocking ways to improve elementary education, particularly in high-poverty and urban settings. She served as director of the college’s largest unit, the School of Teaching and Learning, from 2008 to 2014.
During the summer of 2017, she has 13 doctoral students who are working on dissertations or qualifying exams. Her seminar on critical pedagogy, which she has taught for some 15 years, is often over-subscribed. Because of such high demand, she developed a follow-up doctoral seminar in the spring semester. She also is collaborating with doctoral students on grant-funded research projects, which itself involves a high level of mentoring. She even advises junior faculty members who are learning to mentor doctoral students for the first time.
Bondy becomes animated when discussing her role as a mentor, and it quickly becomes obvious that she loves what she does.
“Ideas are flying, sparks are flying, and that’s what makes things really fun,” Bondy says of her mentoring sessions. “We have outstanding doc students, so mentoring them is not only a job, it’s also fun. I get to learn as much as they do. It’s a collaborative activity, and I’m learning like mad as they push me.”
The mentorship award comes with $3,000, plus another $1,000 for use in supporting her doctoral students. She plans to use the money to pay for two students to present with her at a national conference in Salt Lake City later this year.

Current and former doctoral students praise Bondy’s mentoring abilities.
“I describe Buffy as my academic mother,” Elyse Hambacher (Ph.D. ’13) wrote in a nomination letter. “As the first person to attend college in my family, she has always believed in me even when I wasn’t sure I believed in myself.”
Hambacher, now an assistant professor at the University of New Hampshire, says she continues to collaborate with Bondy on research projects: This year they co-published two research papers and presented at national conferences.
Doctoral fellow Brittney Beck wrote in a nomination letter that “Dr. Bondy recognizes that being and learning to become an educator and researcher is something that involves all of you – mind, body, spirit.
“She has nurtured my competence, as well as my confidence, to create and lead initiatives within the College of Education … Most notably, she nurtured the beginnings of my work with LGBTQ+ issues in education when very few preservice teachers, graduate students, faculty or administration were including this population within their professional practice.”
Bondy says effective mentoring is not a one-size-fits-all endeavor. She works closely with traditional grad students on campus who need individual attention to complete their research projects as well as practicing educators across the country who are working full-time and simultaneously pursuing advanced degrees.
“Knowing students as intellectual, social and emotional individuals is a fundamental component of my approach to mentoring. I must know them well,” Bondy, says. “Some need me to be a cheerleader, some need a taskmaster, and some just need to be reminded, ‘Oh, yes you can.’”