The Hollingers have a history of being “out-of-the-box thinkers”, especially in education. They are the founders of the new TESLA (Technology Engineering Science Leadership Academy), an alternative learning environment.  According to the website, “students are engaged in learning that provides a balance of technology based and hands on approaches to their learning.”  The school opened more than a year ago with 15 students and has since grown to 33 students, ranging in age from second grade to high school.

Examples of the hands on projects the students at TESLA are involved in include raising Mexican Axolotls, an endangered, water-dwelling salamander, and building their own Tesla coil from scratch.

Randy Hollinger inherited his love of teaching from his parents.  Dr. Tom Hollinger is a retired professor at UF and his mom, Mrs. Sandy Hollinger is Deputy Superintendent of schools for Alachua County.  Says Randy, “My mom and my dad both are not just teachers, they’re really good teachers…I would think of the things people had said about my mom or what they’d said about my dad and think, ‘If I’m going to be a teacher, I want people to say those things about me someday'”. Turns out, he has achieved this goal having received numerous awards from a Scholarship of Engagement Award at UF, to being voted one of Gainesville’s most interesting people.

Amy Hollinger has served as assistant principal of P.K. Yonge’s Elementary School, and as a teacher at J.J. Finley Elementary school.  During her career, Amy has been very involved; leading and coordinating numerous programs, attending professional conferences, chairing committees including the School Advisory Council, and giving professional presentations.

Christopher M. Mullin (PhD ’08, higher education) has received the 2012 Barbara K. Townsend Emerging Scholar Award from the Council for the Study of Community Colleges (CSCC). The annual award recognizes a scholar for writing an outstanding research publication that contributes to the professional body of knowledge about community colleges.

Mullin was cited for a series of articles about the student body and future of community colleges published between October 2011 and April 2012 by the American Association of Community Colleges (AACC). He is the program director for policy analysis of the AACC in Washington, D.C., where he conducts research and analysis to guide advocacy efforts for the organization.

CCSC, a division of the AACC, is a council of university researchers and community college professionals who work to advance the development and scholarship of community colleges. Mullin received the award at the council’s recent annual conference in Orlando.

After submitting a top-rated research article, recent College of Education doctoral graduate Stephanie Dodman (PhD ’11, curriculum and instruction) has been awarded a Special Interest Group Scholarly Award by the American Educational Research Association, a national interdisciplinary research association with about 25,000 professionals in the field. 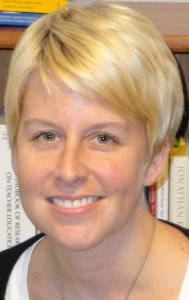 Her dissertation underlined the issue of accountability for chronically failing high-poverty schools, building on previous research findings that without strong internal conditions, schools will not improve. Dodman presented a case study of effective internal reform in an underachieving, high-poverty elementary school and presented a theory of school reform based on her findings.

After receiving her bachelor’s and M.Ed. degrees from UF in 2001 and 2002, respectively, Dodman taught in Florida public schools and worked on a team at UF’s Florida Museum of Natural History creating a science-literacy curriculum for Head Start. Dodman joined George Mason’s education faculty last fall after earning her doctorate at UF.  In addition to teaching curriculum and instruction courses, she dedicates time to Westlawn Elementary in Virginia, where she is a Professional Development School university facilitator. She also works with a high-needs charter school in Washington, DC as part of a school improvement partnership effort.

Rachel Gross (BAE ’08, MED ’09, Elementary Ed.) has been chosen as Teacher of the Year for her school, the Duval Charter School at Baymeadow, where she teaches third grade. This year Rachel’s students outscored the state and district on the FCAT.  Rachel has previously taught fourth grade at Stephen Foster Elementary and Metcalfe Elementary, where she also completed an internship.

Says Rachel, “the University of Florida has truly shaped me into the teacher I am today. The rigorous coursework and wonderful professors taught me to always be reflective, innovative, and meet every students’ need.  I am grateful for my experiences I had through UF, especially the East-side Internship program.  It gave me perspective and taught me the importance of establishing a rapport with students.”

Next year, Rachel will be teaching third grade Cambridge, an advanced studies program offered at Baymeadow.

“I will continue to grow and learn as an educator to hopefully inspire this new group of students.”

Truly Hardemon (MED 2012, Curriculum & Instruction) recently shared how her degree from the UF College of Education has impacted her life.

“Though it sounds cliche, going through the M.Ed. program has changed my life and confirmed my passion for life-long learning.  I have met so many interesting educators working with educational technology from a wide variety of perspectives.  The program opened new windows into online teaching and learning in higher education, exposed me to the rich history the military has in distance education and innovation, and gave me a better understanding of the exciting challenges of integrating technology into K-12 educational environments. I have the firm belief that my graduate degree will serve me well, whether I remain in higher education or take a bigger step and move toward K-12 education.”