Four College of Education alumni will offer career advice that extends well beyond teaching during the college’s annual Education Career Night set for April 8 at the Reitz Union Auditorium.

Calderone, who received her Ed.D in educational leadership in 1999, was elected to the Seminole County School Board in 2010 and served as board chairman in 2011-2012. She has established a diverse and successful career that includes education, marketing, sales, public relations, fundraising and training. Previously, she worked as a college administrator at Stetson University and the University of Florida, and an adjunct instructor at both Seminole State College and the University of Central Florida.

Ellspermann received her M.Ed. in educational administration and supervision in 1983. Recently, the National Association of Secondary School Principals recognized her as Principal of the Year. During her 11 years as principal of West Port High, she changed the school’s entire philosophy by spearheading a college-going culture personalized for students. Under her leadership, course failure has nearly disappeared, the graduation rate has jumped 15 points and participation in activities has increased seven-fold to nearly 70 percent.

Freedman earned his BAE‘ 95 and MAE‘97 in education, and went on to receive his Ph.D. in philosophy in 1983. When he’s not working as an executive director, he doubles as a USF professor of pediatrics, political science and public health. Previously, he was a professor of child health policy at the University of Florida for over 20 years. His lifetime achievements warrant his distinction as one of a handful of non-physicians elected to fellowship in the American Academy of Pediatrics.

Marshall earned everything at UF from his BAE’ 95 in education to his MBA ’09 in business management at UF. He can be considered as the brains behind many online learning operations. He specializes in instructional design theory, integrative content design, learning program solutions and learning systems integration. He is a former faculty member at the University of South Florida and a teaching and technology fellow at the University of Florida. 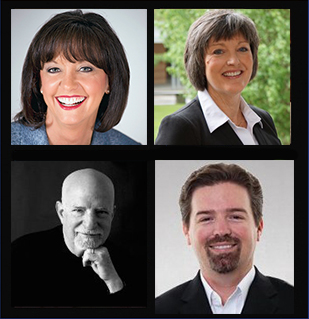 David Fields, a 2008 M.Ed. graduate in social studies education, has been named the Clay County (Fla.) School District’s Teacher of the Year.  Fields has been teaching advanced placement U.S. history and American government at Orange Park High School for the past seven years, and also designed a sports history course that requires students to research the history of a pro franchise or college team.

“I learned that being passionate about my profession helps to get students to buy into the subjects I teach,” Fields said. “Sometimes I think it’s crazy that I get paid to work every day and talk about subjects that I’m so interested in – whether it’s Teddy Roosevelt and the Progressive Movement or how instrumental he was in saving football from extinction in the early 1900s.  “The Secondary ProTeach program at UF gave me the tools to enter my classroom on Day 1 as a consummate professional,” he added. “I need to adapt to new technology and content so I can meet the needs of students in the 21st century.”  Students from Clay County (Fla.) Teacher of the year David Fields’ advanced placement U.S. History class show their support during a recent ceremony held at Orange Park High School.  Fields’ former social studies education professor, Elizabeth Washington, said she wasn’t surprised to learn of Fields’ selection as Teacher of the Year.  “Dave was very committed to making his lessons culturally relevant and engaging,” Washington said. “He was always very passionate during classroom discussions — always willing to think through challenging issues and make thoughtful contributions.”  Fields, who also earned bachelor’s degrees in history and political science with a minor in secondary education at UF, will go on to compete to become Florida’s Teacher of the Year.

Clay Today, a weekly newspaper in Clay County, ran a recent article on his latest honor. 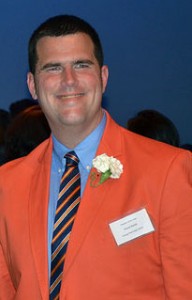